Brennan: Barr Is Fishing For Something In FISA Warrant To "Misrepresent" As A Deep State Plot Against Trump 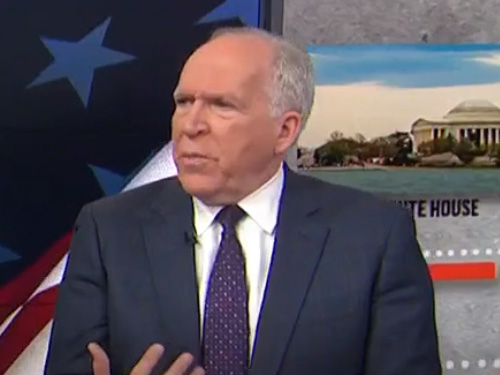 In an interview Tuesday with MSNBC's Nicole Wallace, former CIA Director John Brennan said the Trump team's insistence on investigating the FISA warrants used to surveil members of the president's 2016 campaign is a fishing expedition to "uncover something they will misrepresent as being part of this deep state effort to try to undermine Donald Trump's election" in 2020. "If they look back in 2020, are they going to find something that should have been said differently? Whatever, they might," he said. NICOLE WALLACE, MSNBC: Director Brennan, I want to play for you the three voices on this question of...
[Source: www.realclearpolitics.com] [ Comments ] [See why this is trending]

Khabib attacks Macron over Islam comments: 'May the Almighty disfigure the face of this creature' - Stats

Boy, 16, is shot dead after knife attack on police officer in Russia - Stats

'Tell my children I love them': Final words of mum killed in Nice terror attack - Stats

The victims killed in a terror attack in Nice, France, were an elderly worshipper, a church sexton, and a mom of 3 whose last words were 'tell my children I love them' - Stats

AMU organises protest against President of France for 'Islamophobia' - Stats

‘Death to France:’ Tens of thousands of Muslim protests against Macron - Stats

Why Trump’s Newest Deal Is a “Win-Win-Win” for U.S., Sudan, and Israel - Stats

Detroit hostage to police: 'I don't want to die this way' - Stats